skip to main | skip to sidebar

Last night was the BIG night for our Thursday group's mid-winter swap party. And what a night!
The participants write down some details of their likes and dislikes and then we draw them out of a hat. And it all remains a secret until the BIG night.

I drew Stella, of knitknitfrog, and read that she liked blues, blue-greys and greys with touches of burnt red and orange. So that lead me to the Little squares scarf by Vanessa of doyoumindifiknit. (Vanessa has a great tutorial for making and joining the squares on the left side of the page on her blog).
I went and bought some plain alpaca yarn from Flagstaff Alpacas and proceeded to dye some and crochet a few squares every day. Slowly the pile grew and then I had to decide on the final arrangement - probably the hardest part of the assignment. Lastly I sewed up a few rows every day - and finished it just in time. It's pretty cool. 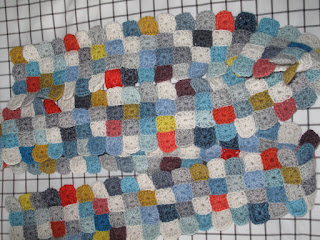 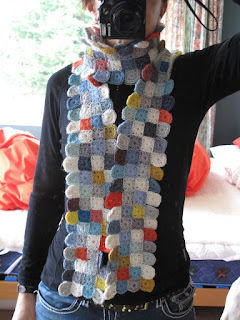 Stella also collects fountain pens so I couldn't resist when I saw this fabric. I found the pattern/tutorial on the net  (mini zippered bag tutorial) and it went so well that I made second one for Morag, our hostess with the mostest. 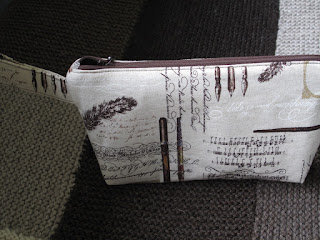 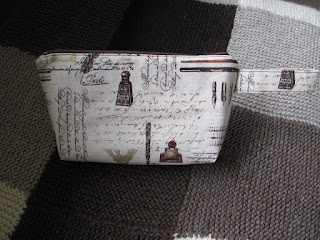 Seeing all the gifts that people had made was amazing. The things people think of and the work that they go to.

My gift was INCREDIBLE. Ana had seen that I liked Islamic geometric
patterns and made me these mitts - and they came with the book!!! 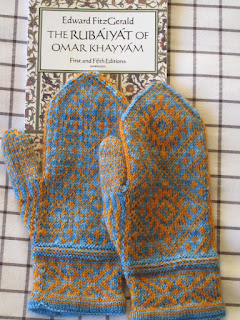 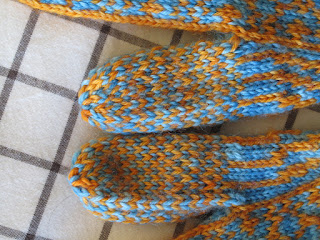 Ana had modified the design on the thumbs and added a Latvian braid on the cuff - all beautifully done. And what made them so, so special are the colours she chose - my favourite gold/orange and then added the turquoise/blue that is so reminiscent of Iranian mosque tile work.
They are truly a work of art - I feel I need to frame them. 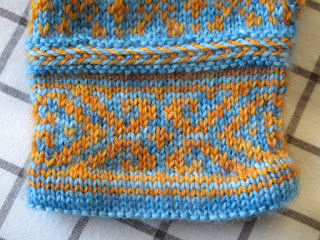 It was also about to be Stella's birthday and she had casually mentioned at our Knit Camp in May that she had always fancied a swimming pool cake. The idea of the pool hooked me and so I then launched into my first ever decorated cake.  It's a bit 'clunky' but it was fun. 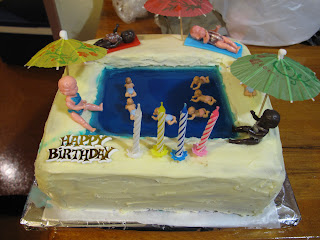 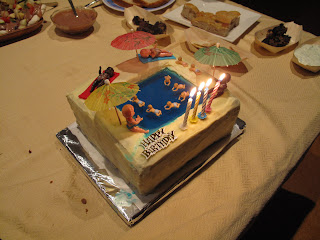 All in all the Mid Winter Dinner and Secret Swap was a great success and we will all be looking forward to next year's.
Posted by ShoeboxSally at 9:02 PM